Rick is a professional forester who has worked for the U.S. Forest Service, the Washington Department of Natural Resources, for a private consulting company, and currently as currently the Program Manager in Forest Resources for the Corps of Engineers at Joint Base Lewis-McChord.  One of his jobs in the DNR was in the Small Forest Landowner Office where he assisted and advocated for small forest landowners.  He and his wife Kristin own 40 acres of forest land in Pacific County and live on a small parcel in Lewis County.

I grew up outside of Sacramento, California on an 18-acre hobby farm. We had a few horses, cows and pigs and grew hay. I learned to drive Dad’s Datsun pick-up when I was 12—its clutch was never the same. 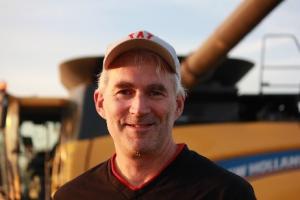 I was in 4-H when I was 10 and raised a 2-day-old drop calf, bottle feeding him twice a day, eventually showing him at the county fair. Afterwards I sold him for $87, which was riches for a 10-year-old in 1974, but I quietly cried all the way home knowing Freddie was going to be hamburger by the end of that week. The reality of life on the farm.

Camping was my family’s main recreation—my folks had a VW bus, and we’d head up to Lake Tahoe for camp-outs. I remember seeing the rangers driving around in green trucks and thinking, “That would be a pretty neat job, driving around the woods in a green truck – I want that job.”

I was lucky enough to have a high school that offered a forestry class. It was there that I learned timber cruising meant more than just driving a truck through the woods on Saturday night.

College for me meant trekking off to Humboldt State, in the heart of the redwoods. In my purely objective opinion, it’s the prettiest college campus that I’ve ever been on. Having a forest literally out the back door of the forestry building meant you could go out and take plots and hike back to the classroom to crunch the numbers. No need to go off to forestry summer camp like other forestry schools…

I worked on the Klamath National Forest in the summers. My first memory was being an inspector on a planting contract that had been awarded to folks from a local commune. About half the planters were women—rather robust and hairy women who were none too shy about discarding clothes on warm days. Or who, in the middle of a conversation, could hike up their skirt and relieve themselves while maintaining eye contact. Uninhibited, and they got the job done.

I got on permanent with the Forest Service upon graduation in 1987. Our District Ranger would introduce me as the last white male he’d ever hire, which was probably true as the Region 5 consent decree was just kicking into gear. I became a timber sale administrator just as the enviros discovered the spotted owl as a tool to shut down timber harvest, so suddenly I was as marketable as a typewriter repairman in 2018.

After a stint in recreation in southern California, and growing weary of the Forest Service white male stigma, I took a job with the DNR and moved to Washington. It was great—the first timber sale I laid out was logged within a few months, and planted shortly thereafter. This was how forestry should be—not years of planning and meetings which would end up for naught.

I worked with a great group in Menlo—we got a lot done, but had fun doing it. And they didn’t give the dumb forester from California too much grief when he cut a hemlock for his first Washington Christmas tree. All the needles fell off after a week—don’t try it.

I ended up with my dream job when the Small Forest Landowner Office was created (then headed by Steve Stinson). I was exposed to the small forest landowner community, and started attending WFFA meetings. At first it was obligatory, but the more I was around it, the more I wanted to be a part of it.

I became a consultant to small landowners while working for American Forest Management. It was a great experience, the most challenging thing I’ve done. It changed my perspective somewhat—it would be great if all government employees would do a stint in private enterprise.

I am currently the Program Manager in Forest Resources for the Corps of Engineers at Joint Base Lewis-McChord. We harvest about 8 MMBF/year, over about 60,000 acres of forestland. Nearly all is variable density thinning, our main drivers being to provide healthy forested areas for troop training and protecting unique and endangered species. The Army foresters do the layout, cruising and silviculture, and the Corps does the timber sale appraisal and administrative work. We put our sales out for public bid—the main restriction is that like the Forest Service, our timber cannot be exported. Aside from the Nisqually River, we have one fish bearing stream on base, and it stops flowing in June. The base’s forestland includes native ponderosa pine stands and oak woodlands.

My wife, Kristen, and I have 40 acres of 20-year-old Douglas-fir in Pacific County. We don’t get out there much, but I like it as an investment—I understand it, as opposed to playing some else’s game by dumping money in the stock market. We live on 10 acres in Lewis County, next door to the best tree farmers that I know—Bryon and Donna Loucks. We do “micro-forestry” on the home place—planting, thinning, pruning and growing Christmas trees for friends and family. 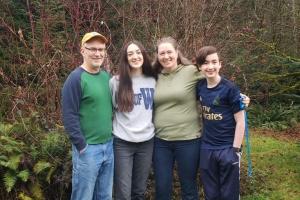 My kids, Claire, 17, and Bryce, 14, just love it when I announce I’m going to prune and they have to pile limbs. You’d think I was asking them to jump into a pool of hydrochloric acid. I’m sure they’ll look back on this fondly. Someday. Maybe. A very long time from now…

We recently had Tom Fox of Tree Management Plus harvest a corner of our property which we replanted in giant sequoia. I imagine in 100 years folks walking under huge redwoods, wondering where they came from, but really just enjoying them.