Chris Clowe’s dad, Earl Clowe, originally purchased 160 acres in Mossyrock in 1946. Chris and his wife, Melanie, moved around the Northwest following jobs (mostly logging) in their youth and returned to the family farm in 1980. They currently hold 88 acres of the original purchase made by Chris’ dad. Chris and Earl embarked on logging of the back 34 acres upon Chris’ return to the farm in 1980. This acreage had grown up in second growth alder, following cutting of the old growth around the turn of the century. As they proceeded with logging, they also gathered cones on adjacent land and extracted seed so they could grow the seedlings to reforest the land with fir. They started out with old, decrepit equipment, but Chris found it necessary to go into debt and purchased a decent, safer piece of equipment, a small Caterpillar dozer. 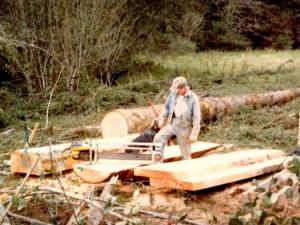 In order to log the back 34 acres, Chris’s father built a bridge sufficient to hold up log trucks and dozers. He sawed up large Douglas fir planks and beams from trees on the property using only an Alaska chainsaw sawmill. This is nothing more than a rack that holds a large chain saw; it’s extremely manual, heavy labor. In recent years, Chris repeated the process, sawing new planks and beams using the same method.

The whole logging and reforestation process took about ten years so there is some age variation from one side to the other of the stand. After the seedlings were grown and planted, Chris and his dad were concerned with the deer browse and seedling survival so they inter-planted more seedlings. Chris then tended the new plantings using both manual brush control and spot spraying of herbicide. In 1996, he pre-commercially thinned the stand that was by then, way over-stocked due to their diligence on seedling survival. 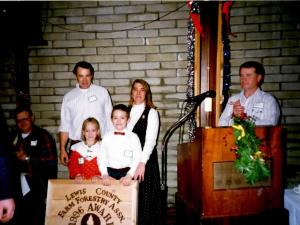 Banquet each year to recognize Lewis County tree farmers for “exceptional land stewardship”. Tree farmers are long term thinkers, not people in it for the quick buck or short go.  Chris and Melanie Clowe certainly represent that.  In 1996, LCFFA presented Chris and Melanie with the Forest Management Award. Twenty-two years later, in 2018, they were “back on stage” at the same banquet to receive the Commercial Thinning Award for that same stand of trees!

The Clowe’s recent Cut-to-Length (CTL) thinning was done late this summer by Ken Wilson of Kens Kutting, based out of Oakville. The tree selection was excellent. The operator/owner did an exceptional job of selecting the best trees to leave while maintaining relatively even spacing. Damaged bark on the remaining trees was almost nonexistent. The property is further enhanced by a fish stream named Salmon Creek, which divides the stand, east to west. It is a beautiful gravel bottom stream that flows crystal clear across their land with the appropriate riparian buffers observed. 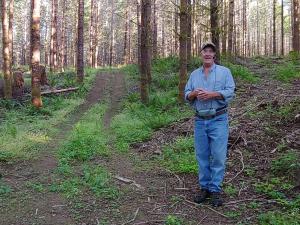 There are few other tree farmers who can say that they logged the land, gathered the seed, grew their own seedlings, planted the trees, did the brush control, did the pre-commercial thinning, and then did the commercial thinning, all on the same acreage of family forestland. They wisely thinned before the crowns got too small to respond, leaving the stand in a healthy, vigorous condition that keeps all options open for the future. They can clear-cut the stand in five or ten years, thin it commercially again or grow it into “old growth”. All options are open to future generations because they have kept the stand in a robust, hardy condition. The Clowes are true “Stewards of the Land for Generations to Come”.