Ken and Bonnie Miller are a fixture of sorts in the small forest owner community of Washington.  They’ve been active in the Washington Farm Forestry Association for years, have hosted an uncountable number of tours on their property, and Ken is an active advocate for small forest owners in state natural resource policy.  This passion for private forestry started back in 1989 when they bought their first tree farm, a 30-acre recently clear-cut parcel in Grays Harbor County that they re-planted and managed with the help of their children. 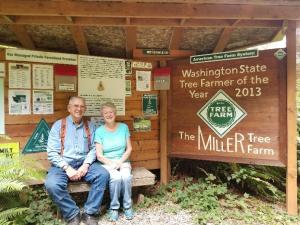 A few years later in 1993 they bought another partially clear-cut parcel in Thurston County wedged between Millersylvania State Park, Scott Lake, a golf course, and a growing residential neighborhood.  This one was 40 acres and came with a house, so they moved in and got to work replanting there too and have been managing both properties ever since.

In 2013, the Millers were recognized for their good forest stewardship by being named Washington State Tree Farmers of the Year. The application for National Outstanding Tree Farmer of the Year provides detailed information on the history of the involvement in management of their own land and outreach to others.

In 2017, an opportunity came up to buy the long-abandoned “back nine” of the adjacent golf course.  With plenty of planting and stand management experience under his belt, Ken didn’t hesitate.  It provided a second access driveway for their house but also a familiar challenge, starting a forest.  This photo shows the “back nine” parcel (to the left) adjacent to the Scott Lake Golf Course (to the right) and the Scott Lake neighborhood (to the back of the photo) (Photo: Patrick Shults, WSU).  An article published in the October 2020 issue of Forest Stewardship Notes tells the full story.

In late 2020, they purchased the last 12 acres of the abandoned golf course, bringing their home parcel, which borders Millersylvania (no relation) State Park, to 108 acres.  Their property borders the Scott Lake Community, and the Millers keep their neighbors informed of what is happening and welcome them to recreate respectively on their property.

But just managing their forest isn't enough to keep the Millers busy.  They rejuvenated the South Sound Farm Forestry Association, serving as President 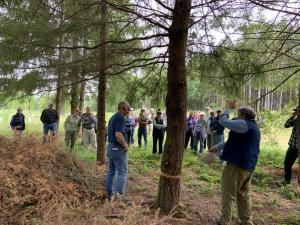 and Secretary/Treasurer for many years.  Ken stepped into the Washington Farm Forestry Association leadership where he served as President for 2 years.  For over 20 years, he has tirelessly pursued regulatory fairness for small forest landowners.  He regularly testifies at Legislative and Forest Practice Board hearings on laws and rules that impact small landowners and hosts tours of his tree farm for any group that will come. Groups that have toured include fellow WFFA members who attend the annual picnic at their tree farm, to regulators, state legislators and the governor, and even Japanese legislators!   For the last 5 years, he has been working hard to get approval for a Small Forest Landowner Template that would simplify the process of small harvests by small landowners.  He never misses a chance to provide input on the impact of the rules and on how long small forest landowners have been waiting for what they were promised in the 1999 Forest and Fish rules.

Ken and Bonnie constantly encourage small forest landowners to join the Washington Farm Forestry Association where they have met and learned from others like themselves.  Ken likes to quote a poem titled "When You're So Old" that seems to explain why he keeps working so hard!  My friends quite often ask of me, why does an old man plant a tree?