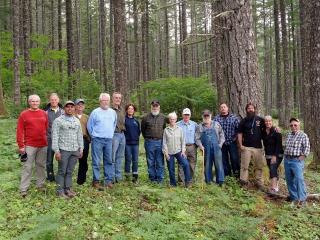 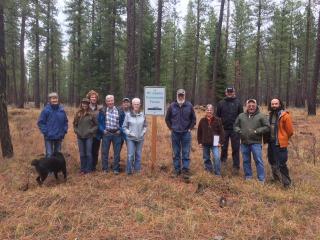 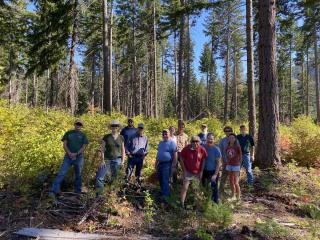 Nate Kayser and Grazing
Nate, a rancher in the Goldendale area, was contracted by Vic to graze Vic’s property earlier this year.  The grazing, under Vic’s young ponderosa pines and Douglas-fir trees, reduced the amount of grass under the tree canopy, reducing the fire hazard in the summer.  About 30 head of cattle were used, for a period of about 6 weeks.  Exact timing and duration of grazing is dependent on several factors, including the type of grass, condition of the grass, and other factors.  Nate’s stock may be available for other small forest landowners for those interested.

Chapter Business
We held a brief chapter meeting in the field, as some attendees had limited time available.

Finances
Jim shared that our chapter bank balance is $1009.47, per report from Anita Gahimer-Crow, who could not attend.
Officer Elections
We held elections, as this is our Annual Meeting.  After about 10 years as chapter President, Jim has asked to step down.  Casey Stults volunteered to act as new Chapter President.  Jim offered to serve as VP to give Casey some backup.  Anita had offered to remain as Treasurer via email to Jim.  Judith Schwader volunteered to act as Secretary.  Members all agreed to our new slate of officers.
Membership
Our chapter membership has not changed since our last meeting.  We have a total of 34 members, including 5 statewide members and 3 complimentary members (DNR employees).  We should continue to look for new members for our chapter.
Future Meeting Ideas
Members are interested in hearing more about Biochar.  Corinne Ilvedson knows an expert who we may be able to talk at a late fall/winter meeting, and we will work on that idea.  Ben Seagraves said a visit to his property north of White Salmon could be worked into the meeting, or a future meeting as feasible.  We may look at a biochar presentation in conjunction with Underwood Conservation District.

Vic and Cindy Blandine’s property
Vic led us on a tour of his approximately 57-acre tree farm.  He has done extensive planting of Ponderosa Pine and Douglas-fir on the property, along with smaller amounts of western Larch and a few Giant Sequoias.  A young ponderosa pine stand was planted over several years, by Goldendale students, in conjunction with the Central Klickitat Conservation District.  The project was not only successful in establishing the tree plantings, but also provided an excellent experience for the students.  Vic still gets former students coming by and noting that they helped plant the trees.  Vic has also successfully established Douglas-fir on another part of the property, utilizing drip irrigation to get the trees established.  Vic has also utilized chemicals (Velpar and Roundup) to control competing vegetation around newly planted trees, as well as fiber mats around seedlings to keep weeds down.  Vic has also conducted pruning of the ponderosa pine stands.  An intermittent stream flows through a part of the property as well; in that area Vic has done thinning and slash disposal.  Vic has left a few slash piles as wildlife habitat in the vicinity of the intermittent stream.

For directions and more information about the chapter or a meeting, contact Jim White, 509-395-2585, jwhite.mars@gmail.com or mtadams@wafarmforestry.com

Membership in a local chapter is included when you join WFFA, and you may also join more than one chapter.

No events scheduled at this time